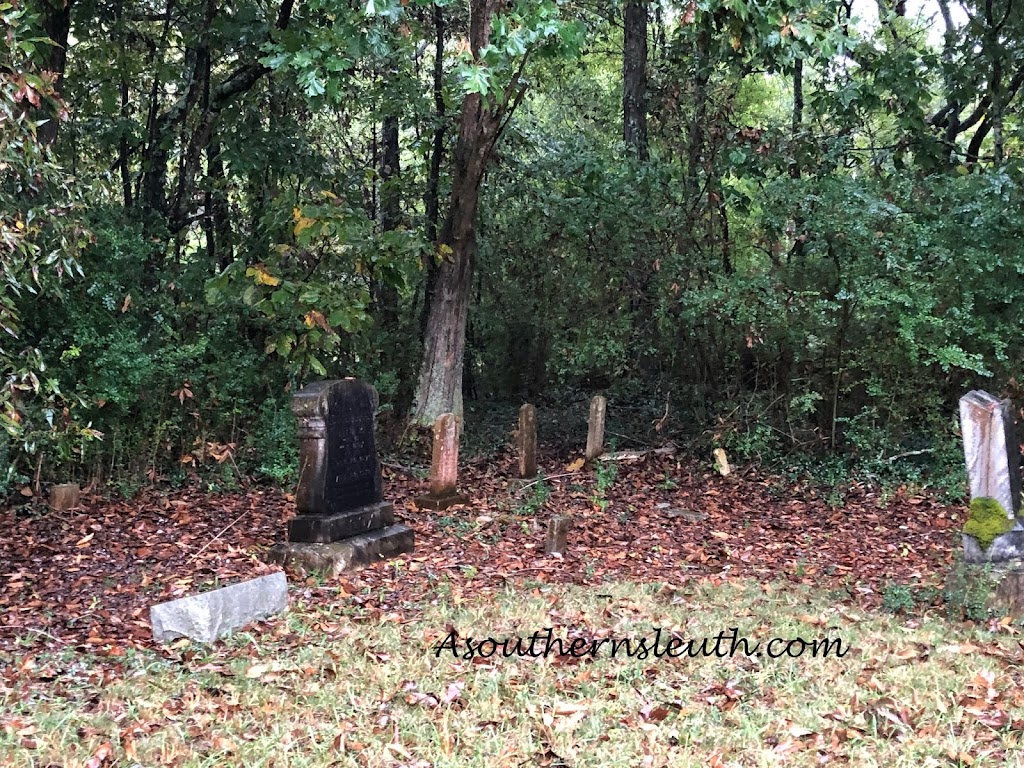 As we pulled up to the property, I felt the hair rise on the back of my neck.

I do admit to a rather overactive imagination at times, but the setting was perfect for a scary movie. The sky was dark and ominous, the rain was coming down in a steady stream and there we sat way out in the country at a very old cemetery, which appeared to be basically abandoned. We debated whether we
really wanted to get out of the car or not…..and for many reasons.

We really weren’t dressed for that kind of rain and the cemetery obviously hadn’t had much attention for some time. And then there was the issue of ….snakes. If you’ve read my blog for a while, you know about me and snakes.

Phobically afraid of snakes, I had done my snake research prior to our trip to Georgia to see if the things I had heard were true and I had learned from “Venomous Snakes of Georgia” written by the GA Dept. of Natural Resources that Copperheads are found in wooded areas, “both wet and dry.” In addition to that, I was cautioned by those who knew I planned to visit cemeteries that it had been a bad year for copperheads. Super.

But my desire to find Frances Rainwater Ayers Bailey’s marker was incentive enough to get me out of the car. Daughter of Joshua and Polly (Peterson) Rainwater, I knew from a journal that she and her sister, Olivia, my second great grandmother, had been close and I was so glad to be able to “visit” her in some way.

As I looked around, I was intrigued by the numerous headstones covered with overgrowth, many tucked deep in the trees. I so badly wanted to explore them all but didn’t dare. The rain and the fear of snakes prevented me from going too deep into the brush and I so kept praying that I would find Frances’ marker out in the open. The whole experience was a little tense…..

And then there was the knocking.

Yes….knocking. Several times while we were there, I heard a knock—three knocks in a row to be exact. Looking around, I couldn’t figure out where it was coming from. It sounded fairly close and it clearly was not a woodpecker. I know what they sound like. I walked around the abandoned church a couple of times to see if possibly someone had managed to get inside the old church and was trying to scare me away. (Yes, I’ve seen too many movies.) But it was boarded up with no obvious way to enter.

But what I did finally find was Frances Rainwater Ayers Bailey’s marker.
Obviously, it was not an old marker, and there were flowers there, so apparently, someone else had visited within the week. I wished I knew who.

Frances’ marker was in-between the Ayers’ family fenced area and the church. Her first husband, Reuben Ayers had died in the Civil War, which was many years before Frances’ approximate 1913 death date.

Several years after Reuben’s death, Frances married Robert Bailey. Although they lived next to Matilda in Haralson County right after Matilda lost her husband, the Baileys later moved to the Blooming Grove area and lived there for many years. It was a beautiful community known for its abundance of mineral springs. A newspaper article described it this way:

“Blooming Grove, about eight miles south of Cedartown, it is stated, is capable of being made a valuable resort for people in summer, several nice springs affording different varieties of water, fine scenery and pleasant surroundings generally being characteristics.” (1)

As always, just standing there at Frances’ humble little marker, I felt a warmth at seeing some physical evidence that she was real and I was so glad that I had braved the rain, wind and yes, even the fear of snakes that day to find Frances.

Earlier I wrote a three-part series about Frances and those posts can be found here: