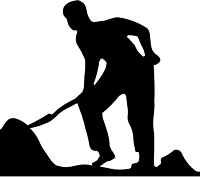 After marriage, John and Olivia settled in Haralson County, Georgia and John began farming. They
didn’t live too far from Olivia’s family but they did live some distance from John’s parents, although John had siblings that eventually settled nearby. John and Olivia’s first child, William Franklin, joined their family in August of the following year, followed by John Thackason in 1855. As a male member of the community, John shared the responsibility to help maintain the road on which he lived. In 1855 John took his turn and worked alongside Thomason Moore and Eli Howell as Road Commissioners for the Second District in Haralson County.

In 1857 John and Olivia welcomed James Roderick into their family and Mary Elizabeth in 1860 but sadly neither of those children survived. About that same time, John and Olivia decided to pull up stakes and move just over the state line to the rolling hills of Calhoun County, Alabama. Did they go to be near Olivia’s sister, Frances, who was living there with her husband Reuben Ayers and daughter Mary Ann? Although Frances was six years younger than Olivia, the sisters lived in close proximity to each other much of their adult lives, so I suspect this played a significant part in the move. Calhoun Alabama was chiefly an agricultural area and the farmers grew cotton, corn, and wheat and so John was able to do what he knew best, he farmed. 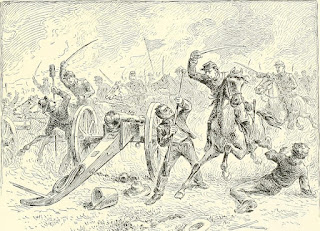 The next few years were rough for the south and men anxiously enlisted in the Confederate Army to protect their southern soil. Although many men fought from Calhoun, Alabama and from Haralson County, Georgia where John had previously lived, John did not enlist. John had brothers and brother-in-laws who fought and I’ve always thought it was curious that John did not enlist with them. Although I know there were quotas and that often men with families did not serve,  John had brothers and brothers-in-laws who left homes, wives, and children in order to fight. Some descendants today have questioned John’s loyalty to the Southern cause and to them I point out that John named his youngest son, Robert Lee Ganus.

It was on 7 January 1865 that John did something even more curious. That is IF the clerk copied the deed into the deed book correctly. It reads:

“This indenture made and entered into this the seventh of January eighteen hundred and sixty five between J. J. Miller and John M. Ganes of the one part of the state of Alabama witnesseth that the said J. J. Miller and aforesaid for and in consideration of the sum of three thousand dollars to him in hand paid at and before the sealing and delivery of these presents the receipt whereof hath granted bargained sold and conveyed unto the said John M. Ganes his heirs and assigns on tract of land situated lying being in eighth district of original Carroll now Haralson County known and distinguished in the plan of the said district by being the west part of lot number one hundred and fifty six all of said lot lying west of the Tallapoosa River containing one hundred and fifty acres ore or less ………… (emphasis added)”

THREE THOUSAND DOLLARS? Did John really pay $3,000 for land at the close of the Civil War? The amount was clearly written out longhand and yet, I can’t help but wonder if perhaps the clerk read the original deed wrong. Using an inflation calculator, $3,000 dollars in 1865 would be equivalent to approximately $47,762.28 today. Even if an additional zero was inadvertently added when the clerk recorded the deed in the deed book and the amount should have been $300.00, that would equal $4,776.23 today. Either way, where did John get that much money at a time when most Southerners were just trying to survive? The land was lying directly next to his father-in-law’s land on the Tallapoosa River and his father-in-law, Joshua Rainwater had a ford on his property, which was generally profitable, but what value did John’s land have? By tracing the deeds for this property, nothing indicates that that land held any unique value.

I tend to think that the clerk recorded the deed incorrectly as just two years later,  on 12 March 1867, John sold the same piece of land for a mere $200.00. Even if the clerk had incorrectly recorded the deed by adding an extra zero, it still appears that John likely lost money on the land but I still wonder where at the very least, he got $300.00 to purchase it at the close of the war.

Soon after John sold the land, he made yet another move and so it is likely that he sold the land in preparation for that move. His next move was even further away and would be even harder to understand.