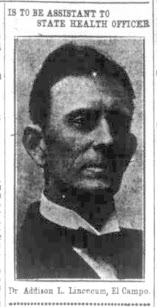 In July of this year I will celebrate a birthday that I consider to be among the biggies and, as I have looked toward that day, I have thought a lot about my life and the things that have happened. I think we all tend to do that when we hit certain landmarks in our life. Often those times are birthdays or anniversaries, but for some like Addison Lysander Lincecum, who influenced and helped so many, it seems only fitting to hold a special party devoted just to him.

At eighty-sixed years old, Addison was the center of the party. They came to honor him, to celebrate his life, and to pay tribute to a man who had given so much to their community and to his country. They fittingly called it “Dr. Lincecum Day.” He had lived a life full of adventure, never taking a back seat and always eager to fight for the things he believed in. The “Dr. Lincecum Day” celebration was a special night for Addison to reflect on his life and to spend time with those he loved. Unfortunately, although there were many good friends there that night, there was one very significant person missing. His wife Letha of 61 years had passed away just a little over a year earlier.

What things in his life had meant the most to him? What had been the most fun and the most challenging and what, if anything, would he change?

By the mid-1870’s Luculus and Fanny Lincecum moved their family to Lampasas, Texas. There, Addison was reared in a home where education was deeply valued and with a father known for his compassion.

Raising a family in the early days of Lampasas could not have been easy nor worry-free. At that time, Lampasas, was plagued by lawlessness, saloon fights and feuds, such as the feud in 1877 between the Harrell and Higgins brothers (see Horrell-Higgins Feud for more information). Lampasas was the only place in the west where a gunfight in a saloon resulted in the death of four policemen.

While there were many good things in Addison’s life, he also experienced heartache at a young age. There are few events more traumatic for a young child than losing a parent, but witnessing their death is unimaginable. One warm evening in June of 1878, while sitting at the supper table, Addison’s 35-year-old mother, Fanny suffered a heart attack and died. In minutes, the four-year old’s whole world was upside down. His father, Luculus was faced with the heartbreak of burying yet a second wife.

Luculus, a grieving widower, no doubt struggled to care for Addison and his little brother Pachal while keeping up with his busy medical practice. Six months after his mother’s death, Luculus married Emma Oliphant and Addison gained a step-mother and eventually, several more siblings joined their family.

As a young man, Addison won the attention of the much sought after Letha Gandy, a school teacher and writer. In December of 1897, they married.

“LINCECUM-GANDY-Lampasas has captured another prize. Dr. Ad. L. Lincecum and Miss Letha Gandy of Hallettsville, Lavaca County were happily married and arrived in this city last Saturday. And thus it is that Lampasas has added another bright star in her constellation of fair daughters.

The bride is of one of the oldest and most highly respected families, and a young lady of culture and refinement.

The groom is the son of Dr. L. G. Lincecum and is well known to everybody, having lived in Lampasas since his early childhood. He is a promising young physician and all Lampasas has a warm welcome for the young couple–the groom to his old and the bride to her new home.

For the present, they are domiciled at the groom’s father’s residence on West Third Street.”

August of 1900 held a full range of emotions for Addison as he said goodbye to his father who passed away on August 17th and then welcomed his and Letha’s first child, Barnabas Gandy Lincecum into the world on August 29th. They would eventually bring three more children into their home. 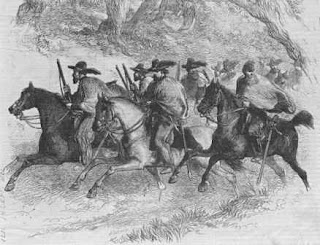 In the footsteps of both his father and his grandfather, Addison studied to become a physician and entered Baylor College of Medicine. His education was temporarily interrupted however when he joined the Rough Riders in the Spanish-American War.

In 1917, angry over the death of a doctor and friend of his, he requested a commission with the Texas Rangers in the hunt for the Mexican Revolutionary General, Pancho Villa.

After the fighting was over, he returned to his studies at Baylor. To pay his way through medical school, he worked as an engineer on trains which moved granite blocks to the Galveston jetties. He lived to be the last survivor of the first graduating Baylor graduating class. 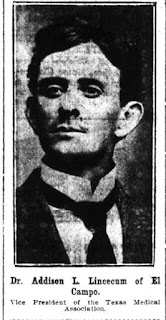 Addison accomplished many things over the course of his life, including a service overseas as an army surgeon in France during WWI, he served as president of the city and county medical society and was a member of a Lodge and was a Mason. He served on the Texas State Board of Health investigating the bubonic plague. He was an administrator of the Nightingale Hospital at El Campo and had even served as a postmaster and mayor in El Campo. As busy as he was, Addison found spent time to pursue his interests and became a champion fiddle player.

Not to be dissuaded by his age, at 80 Addison became a reporter and commentator for the El Campo radio station, KULP.

And so it was no surprise that in March of 1964, Addison’s friends gathered and paid tribute to him not only for all that he had accomplished during his life, but also for who he was and the difference he had made in their lives. Known for being happy, he made others feel welcomed and comfortable. He had done much to make other’s lives more comfortable and to improve their community all while being a good neighbor and friend.

Suffering from the effects of a stroke, Addison would spend the last few years of his life in a wheelchair while living with his son and his wife at Gandy’s Bend. There as he put it, he waited for the time when he would be buried beside his wife in the family cemetery a short distance from the house. That time came on December 6th, 1965.

Note: Addison’s mother, Frances, or Fanny as she was called, was my second cousin, three times removed.  She descended through my third great grandfather Joshua Rainwater’s brother, John Rainwater.

Details of Addison L. Lincecum’s life were derived from a variety of newspaper articles accessed on The Portal to Texas History.

9 thoughts on “Center of the Party at Eighty-Six”