The camp operator slowly opened the door and peered inside the small room at the tourist camp. No one had been seen coming or going from the room all day. Was anyone there? Had the man who rented the room taken off without paying the bill? As the operator looked around the room for evidence of its status, he realized that there lying on the bed perfectly still was a man and a woman. Each had a gunshot to the head. Beside the man lay a pistol.

It was a typical warm humid fall Sunday on the third of October 1937 in the tourist camp located in Weatherford, Texas. Typical of other such camps, some people stayed a night and others stayed longer but generally the camp operator had some idea of their status and plans. Finding the occupants dead was certainly not typical. Had no one heard the gun shot? What had happened?

A few days earlier, on the 30th of September, thirty-six-year-old Tucker Royal Gurganus checked into the camp. Some say he came alone and that later his wife Nena Frances Mitchell came for a visit, but I have no evidence to this effect. The couple had been married for several years but there had been some difficult times in their marriage and some say there had been talk of a divorce. While they had not had children together, Nena had three children from her previous marriage.

Tucker Royal Gurganus was born 3 November 1901 in Anderson County, Texas to parents, James Taylor Gurganus and Malinda Thacker. Both James and Malinda were Alabamans by birth, but had become part of the great migration to Texas and it was there in Texas that they brought their seven children into the world.

Nena Frances was born January 17, in 1905 to Charlie C. Mitchell and Emma Trammell, who were both native-born Texans. Charlie and Emma also had 7 children, five of whom were girls. Frances was their second child and their second daughter.

Nena was only seventeen when she married her first husband, Emmit O. Pettiette in 1922. Over the next five years, they had three children, two girls, and a boy. Nena and Emmitt eventually divorced and she took their 3 children and moved in with her parents.

At some point, Nena and Tucker met and married, but he too had a nose for trouble and thankfully there are records that at least help tell a portion of their story, which I will share in upcoming posts. 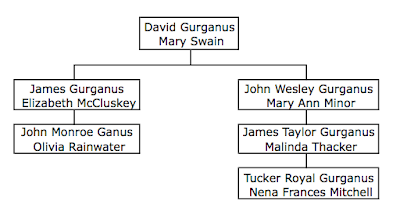