As we sat on the lawn chairs pulled up close to the fire pit, the fire mesmerized us. Swirling colors of orange and red swallowed the burning logs while the smoke constantly shifted directions, stinging our eyes and choking us. We always said smoke followed beauty, so while it burned our eyes like the dickens, we acted as if it was a compliment when it came our way.

It was the last night of our week long camping trip and the night Dad always told us a spooky story. It was tradition and I had a love/hate relationship with the story. Dad was a great story teller and could really draw us in, so for that reason, I loved the story. But when the fire was out and I was in bed in the pitch black of the night mountains, the story replayed in my head and my imagination conjured up all kinds of images. I heard every snapping twig or suggestion of a critter or something more sinister outside our little tent trailer and it was often a very long night.

Every year our family went camping and we loved those trips. We would fish, hike and swim in the streams. Some of our best memories are of the camping trips our family took in the mountains of California and Colorado.

As I was reading in my Grandma Ganus’ life story, I was surprised to discover that Grandma Ganus’ family also camped. Reading about her life in the early 1900’s,  I guess I thought everyday life was close enough to camping they didn’t need the camping experience, but apparently nothing quite compares to the clear crisp air and beauty of the mountains.

Grandma shared the following story about a time her family went camping and I had to wonder if such stories had served as inspiration for the spooky stories my father spun for us. (spelling and punctuation original.)

“A fishing trip I recall with my parents was up on the Conejos River. Dad, Mother and all us children, Martin, Mable and their baby girl, Evelyn, only six weeks old. My baby sister Elsie was nine weeks old. Mother and Mable and the babies rode in a buggy, the rest of us in the wagon. I think Martin must of rode some of the way with the women. This trip also took three days on the road each way. We went by way of the Alamosa Reservoir, up the Alamosa Canyon, to the Conejos River. We camped below the Old Ghost Town of Platora. When we arrived there, it was almost night and raining. Dad and Martin got the tents put up as soon as they could so the beds could be fixed and a bit of supper prepared. The next day the sun came out nice and bright, it was a pretty day.

“Dad and Martin had to go to meet the sheep herder at a given place, and take him some provisions. The herder had a big string of fish for them when they met. The herder had taken the sheep up to Blue Lake, where the feed was better, so he didn’t tarry long with them. The next day the men decided to try their luck at fishing. They got their outfits and started down the river. Just after they had crossed the river on a bridge, one of them happened to look up the mountain. there setting on a big rock was a woman, half undressed, with the gun laying across her lap. The men didn’t know who she was, or what she was doing there, so Martin came back to camp while dad tried fishing in the river while he was gone. Martin had a pistol in the trunk. He got it and loaded it and told Mable to use it if the woman came bothering us.

“We were all frightened, would hardly go out of the tent all day. She never came by, and the men said when they returned that the  woman was gone when they went back to fish. A couple mornings after this the horses were gone. Dad was sure they were headed for home. So Martin went to find them and bring them back, “on foot.” Sure enough they were on their way home. Martin found them at the “World Ranch.” How they could have gotten so far, hobbled as they were, was a mystery to everyone.

“It was about dark when Martin returned to camp. He told us this story. He had passed a certain house while looking for the horses, and on the way back as he drew near the same house, a man came out and talked awhile. He asked him in to rest a little while as he knew Martin must be tired and thirsty, after being gone so long. He had seen Martin go by in the morning. Martin said the man appeared to be real nice fellow, and when he went in the house, there sat the same woman he and dad had seen setting on the rock with the gun across her lap. Martin said he didn’t know what to think at first. But the man told him that the woman was his wife, and that their only child, a boy, had been killed in a train wreck, and she had lost her mind. She wasn’t harmful and had never hurt anyone. But she did like to hunt animals and she liked the mountains. So every summer they came and stayed in a cabin they had built themselves. He said she was very good with the gun, that she had killed a number of coyotes, and bear and a few lions. Well, we were all excited over the story and of course felt sorry for the poor woman and the man. But we were also kinda glad when we were again all in the wagon and buggy and on the way home.”

Crazy people loose in the mountains along with the tales of Frenchman’s Flat were often at the center of my father’s stories and while we assumed they were fiction, I now wonder how many of those stories were based on stories that were true. Good thing I didn’t know that as a kid. 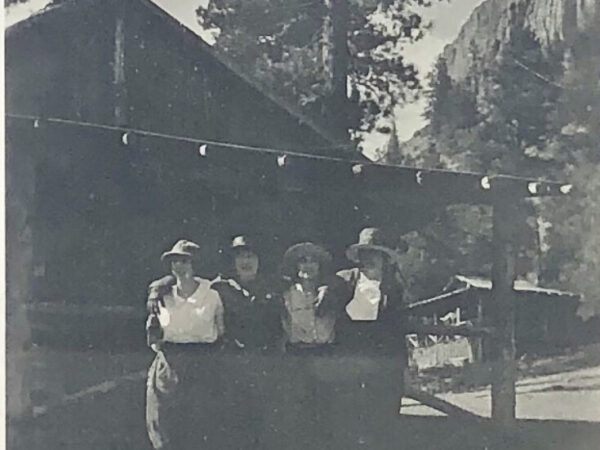