I’ll always remember the day we drove into a small little West Texas town on our move  from California and spotted a Piggly Wiggly sign.  Our family had never seen a Piggly Wiggly, much less heard of that particular grocery store chain and so my brothers and I did what came most natural to us kids, we laughed ourselves silly.

After years of living in the Texas, we grew accustomed to the name and joined the locals in shopping there.  Years passed and eventually my family moved away and I’ve never seen a Piggly Wiggly since.

Recently as I was going through some family pictures, I came across this picture of my Grandpa’s twin brother, Orson Merritt Ganus, driving a Piggly Wiggly truck.  I couldn’t help but smile at the site of the Piggly Wiggly logo on the side.

I wish I knew the full story behind this picture.  Was it possibly taken on Orson’s first day of work at Piggly Wiggly? Dressed in a suit and tie, this job was in stark contrast to the farm life he had experienced in Colorado as a young man and I wonder if he felt an anxiety over that difference.  Was he excited and hopeful for a future in a new career?

While I am unsure exactly when this picture was taken, based on pictures of grocery trucks found on the internet, my best guess would be that this picture was taken in approximately the late 1920’s or early 1930’s.  I turned to the census to see if I could find any clues about when Orson worked with Piggly Wiggly.

In 1920, Orson was living in Sanford, Colorado where he worked as a farm laborer according to the census.1    But by 1930, Orson had moved and was living in Okmulgee, Oklahoma.  Orson married Frieda Hembree in May of 1924 and by 1930 they had one son, and were expecting their second child.  On the 1930 census, Orson is listed as a salesman for a grocery store and Frieda indicated that she was working as a sales girl at a dry goods store2. This seems to support the possibility that the picture of Orson was taken around 1930, give or take a few years. 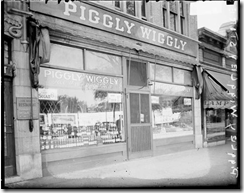 Had Orson taken a job as a salesman with the hope of being able to better provide for his growing family? With a second child on the way, was he looking for a job with a higher earning potential?

Being a  salesman did not become a lifetime pursuit for Orson, however, as evidenced by the 1940 census, where he is no longer listed as a salesman, but is listed as a filling station attendant.3

Did the job of salesman not suit him?  Were the hours too long?  Was there too much pressure or was wearing a suit too foreign? While I may never know any more about Orson’s time as a grocery salesman or why he didn’t continue in that job, I am grateful to have a copy of the picture of him driving a Piggly Wiggly truck.  This image adds dimension to Orson’s life and makes me think that he was willing to try different things in an effort to support his family. In addition, the picture reminds me of time with my brothers and when something as simple as a sign seemed hysterically funny.

22 thoughts on “Giggling With The Pig”