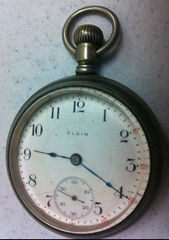 Time.  From the time we are born until the time we die, our life is broken up into increments of time.  While we are all given 24 hours a day, the total time that we spend on this earth and how we spend it, varies tremendously.  For each of us, the time to which we are born and live creates the stage for our life and determines much of what we experience. The way we spend our time creates who we are.

Born on 23 June 1863 in Calhoun, Alabama to John Monroe Ganus and Olivia Rainwater, Roderick, was the fifth child of eight born to the union, although only five sons actually survived to adulthood.

For the first few years of his life, Roderick’s family lived in Calhoun County, Alabama before moving to Pine Bluff, Arkansas, where they lived for about three years.  By 1870, John and Olivia returned to their home state of Georgia, with their four sons, William Franklin, John Thackason, Roderick Monroe and Newton Lafayette.  Soon after their move back to Georgia, their last son, Robert Lee, was born. There in Haralson County, Georgia,  Roderick grew up with a house full of brothers, worked on the farm, learned to hunt and enjoyed the close proximity to aunts, uncles and cousins.  While they did the best they could with what they had, life following the Civil War was a difficult  time of  “Reconstruction”  for those in Georgia and  the Ganus family was no exception.

In November of 1886, at the age of 23, Roderick, along with his parents, siblings and their families, boarded a steam locomotive bound for Colorado where they would remain for the next ten years. Then in about 1896, Roderick accompanied his parents and siblings in a move to Oklahoma where they would all live for the remainder of the lives.

I wish that I knew the story behind Roderick’s watch.  Did Roderick buy the watch for himself or was it a gift? 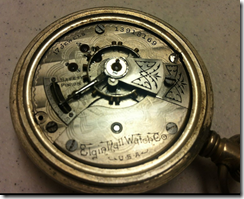 As I studied the pictures and thought about what the watch might have meant to Roderick, I was glad that this precious possession had been preserved and had made its way into the hands of a beloved great grandson.  I am equally grateful that he generously shared pictures of the watch with me and others.

Curious about how old the watch might be,  I checked a database for pocket watches to see what information might be available. Based on the make and serial number, the estimated production year for the watch was 1909.  I knew that in 1909, Roderick was 46 years old and had been married to Carrie Melinda Davis for 4 years. (Carrie was the subject of posts here and here.)  By 1909, Roderick and Carrie were living in Okmulgee, Oklahoma and had  two children, John William and Bertha Mae.

Wanting to know more about Roderick during that time period,  I looked for him on the 1910 census.  As I pulled up the image on Ancestry and saw  Roderick’s household, tears immediately filled my eyes and began to slide down my cheeks.  Along with Roderick and Carrie were their children John W. and Bertha, but in addition,  listed in their household was my grandpa, then nine year old Heber, his twin Orson and Roderick’s thirty-eight year old brother, Newton.  (I shared Newton’s sad story in this post.)

The finding confirmed what my grandfather had written in his life history.  After the death of his mother in 1909, which followed just three short years after his father’s death, it was Roderick that had taken him into his home. Years ago, when I shared that story with one of Roderick’s descendants,  he indicated that Roderick had never had very much in material goods and had always struggled to make ends meet.  He didn’t know how Roderick could have fed another mouth, so I was shocked to learn that Roderick didn’t feed just one extra mouth, but he had fed three!  He had taken in two energetic young boys, who likely had bottomless pits for stomachs, and Roderick’s adult brother.  The census was taken in April of 1910,  which was a little over a year after the death of Heber and Orson’s mother, meaning this had not been a short visit for them. 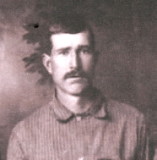 As I pondered Roderick’s life in terms of time, finding that he had taken in his two nephews, Orson and Heber, and his thirty eight year old, mentally ill brother, Newton, spoke volumes about Roderick’s use of his time.  Fast forward to 1930 and from that census I learned that at the age of sixty-six, in addition to providing for his wife and four children, Roderick had taken in his daughter-in-law, Thelma, and grandson, Carl.  Truly Roderick made time and space in his life, in his heart and in his home for those in need at many stages of his life.

I’ve always felt drawn to Roderick.  When I look at the only known picture of him, I see a tenderness and a kindness in his face.  Roderick’s life and experiences spanned from the raging brutality of the Civil War in the the South to the harshness shown by Mother Nature in the days of the Oklahoma Dust Bowl.  Yet from all indications,  rather than allowing the struggles of life to harden him, Roderick seemed to instead be more sensitive to the vulnerability and delicateness of the human condition, ever willing to give of  his time to alleviate the sufferings of others.

As shared in his obituary:

[Roderick] was an upright and worthy citizen and loved and respected by those who knew him.  His being translated into the new life will leave a vacant place not only in the hearts of loved ones but in his wide circle of friends and neighbors . . . “

While I do not know the story behind Roderick’s pocket watch, I am grateful that his great grandson shared pictures of it with me.  Doing so caused me to take the time to look at Roderick’s life a little closer and in the process I was able to see evidence of his generosity and kindness and the way in which Roderick used his time to lift and bless others in their need.  It seems only fitting that a pocket watch has been passed down through generations as truly his use of his time ultimately defined him.

Obituary shared with me by descendants, but source not recorded.

8 thoughts on “The Gift of Time”