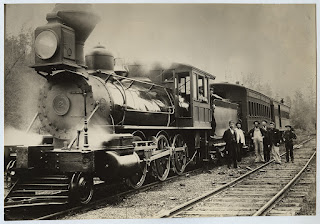 We’ve moved. After twenty years in the same home, we sold our home and moved to something smaller. We feel good about the decision and know this is the right step to take at this point in our life, but nonetheless, it is hard. We raised our family in that house and we have many fond memories there.

As I said goodbye to our wonderful home, I kept thinking about John and Olivia (Rainwater) Ganus who moved across country when they were about our age. Their move in 1886, however, was a much more difficult and drastic move. Without the benefits of modern technology and modern travel, and with limited funds, they left never to return to Georgia or see their friends and extended family again. Unlike many others of their time, John and Olivia’s move wasn’t motivated by the desire for more land, or in order to join other family members who had moved ahead, but their move was more about finding a place to live where they could feel safe.

The Ganus family joined the LDS church in the midst of immense opposition towards the LDS missionaries and the church members. In the years that followed their conversion, the persecution against the Mormons intensified and so many of the southern Mormon families began to emigrate west. John and Olivia remained in Georgia longer than many, but eventually, they decided that it would be best for their family if they too left Georgia. On Monday, October 11, 1886, Elder Murphy recorded that he helped John make arrangements to emigrate.

On Thursday, Oct 21, 1886 on the road coming from town, LDS missionary, Elder Murphy ran into one of John and Olivia’s younger sons, Newton L. Ganus. Newton assured Elder Pledger Murphy that they were going to Colorado for the “sake of the Gospel” and not to get rich. Although it had become increasingly difficult for Mormons to make a living in Georgia, there was no promise that they would prosper financially in Colorado either although Colorado was chosen in part because of the availability of land and the lower cost of living there. However, the members of the LDS church had been counseled not to expect to get rich there and clearly, Newton had gotten the message.

The next day, on Oct 22nd, Olivia visited her sister Frances for the last time. It must have been a tearful occasion as sisters who had lived near each other for their entire lives said goodbye. Earlier, John and Elder Murphy had visited Olivia’s sister and Brother-in-law, Robert and Frances Bailey in an effort to share their gospel message, but according to Elder Murphy, “they were not very much inclined to the gospel.” Olivia must have been disappointed. 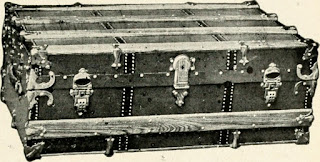 On Friday, November 12th, Elder Murphy helped Franklin (John and Olivia’s oldest son) pack up for Colorado. In his journal, Elder Murphy recorded that the Ganuses were short the cost of one train ticket, so G. W. Driver loaned them $10.00 so they could all go. Elder Murphy said, “Their hearts were made glad and they rejoiced in having the privilege of all going to Zion.”

A few days later, on November 16, 1886, Elder Murphy wrote that he went to G. W. Driver’s house with John Ganus and together they did the hardest days’ work that he had ever done in his life packing things up so they could get it all to the depot.

The following morning, Elder Murphy saw the Drivers, the Ganuses and others to the train station. John and Olivia, their sons, daughters-in-law, and grandchildren all boarded the train bound for Colorado.

Hopefully, John and Olivia’s had extended family members and friends at the train station to see them off. LDS Missionary, Elder Murphy recorded that he watched from the platform, waving as the train carrying the small group of converts passed out of sight. I can imagine the Ganus family waving back to a missionary who they had grown to love and who had done so much for them. Were there tears? There must have been mixed emotions for Elder Murphy; relieved that they were able to leave and yet knowing that with this group went much of the support for the remaining LDS church members and missionaries.

Although we don’t have a written record of what they felt, truly it can be said that for John and Olivia, their actions spoke louder than their words. As difficult as it was on so many levels, rather than deny or turn away from what they believed, with courage and commitment, they packed up their belongings and left their home and extended family to move hundreds of miles away to start a new life where they could worship as they chose.

John was 60 years old and starting over wouldn’t be easy. Was he worried about his ability to make a living? Was he emotional about leaving behind people that he loved? Was he relieved to be escaping the persecution aimed at members of the Mormon faith? Was he excited for the new life that lay ahead?

In Kansas City, John and family changed trains and headed toward Pueblo, Colorado. In Pueblo, they boarded a narrow gauge line that would take them over the mountains and into the high mountain valley of San Luis.

As they disembarked the train, did they pause to look out over the wide open fields of the San Luis Valley? The valley was so different from their densely treed Georgia home. What did they think? Did they feel butterflies of excited anticipation? Did their hearts sink just a little as they realized how different life would be there? Were they dressed appropriately for the weather or did they shiver with the chill in the air? The average temperature for Manassa in November is 30 to 40 degrees and sometimes there is 4 to 5 inches of snow.

At the train station, they were greeted by members of the local LDS church who took them by wagon to their temporary accommodations in the homes of other members of the Mormon church. Many other Southerners who had preceded them in migration were already settled there and helped the newcomers with the transition. Although the Ganus family had moved before, this move was dramatically different from any other move they had ever made.

Moves mean new beginnings and so often they can be good, but at the same time, they can be trying, both emotionally and physically. We just moved across town and yet as I look ahead to life in our new place, I anxiously wonder how well we will adjust. Without any question, for John and his family, the move was much more drastic and the adjustment would be much more extensive.

8 thoughts on “For The Sake of The Gospel— 16 Becoming Acquainted with John M. Ganus”