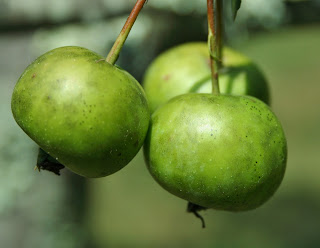 I considered myself one of the lucky ones when my Grandma Ganus moved to a small house on Main street in Sanford, Colorado. What was so good about living on Main street? There were several good things, one being that we could sit out front and watch people come and go. In a small town like Sanford where life was slow and simple, knowing who was going where and with whom could be big news. Lucky for us, Grandma’s crab apple trees provided the perfect perch for us and provided a little cover because we could watch without others realizing that we were watching. It could have also provided a snack at the same time, but every year,  I tried, I really tried, to like the sour crab apples in those trees, but even with a good salting, I just could not eat them. Even now, it makes my mouth pucker just to think about biting into one.

But the truly best part of living on Main street was that it meant a prime seat to the big event of the year, the 24th of July parade!!!

I loved being in Colorado for the 24th of July. The 24th of July, 1847 was the day the Mormon pioneers arrived in the Salt Lake Valley and so it is a day of celebration for members of the LDS church, everywhere. Most of the early inhabitants of the cluster of small Southern Colorado towns were either descendants of pioneers who had first settled in Utah and then were sent on to the San Luis Valley or descendants of a Southerner who fled there after joining the LDS church.

In Colorado, the 24th celebration actually lasts an entire week. The activities are spread among the small neighboring towns of LaJara, Sanford and Manassa due to the high density of Mormons in those small little farm towns.The celebration includes parades, a pageant, rodeos, activities such as three-legged races, pie eating contests, dances, ballgames, etc. A carnival always comes to Manassa and an afternoon spent there includes a mouth-watering hamburger. It is quite the celebration. You can read about the history of the celebration and see details about the most recent celebration HERE. We loved going as kids and it continues to be a wonderful tradition today.

Southern Colorado was selected as a place for the Mormons to emigrate to in part because land was reasonable and there was access to water. (1) When the first group of Southerners arrived in 1879, there were only about 160 living there. (2)  That group of Southerners, like those who would follow them, arrived poor and fairly ill-prepared for the harsh winters and short growing seasons they would experience. Other Mormons were sent from Utah to settle there to help the Southerners with the transition. Latinos who were living there first helped both groups through the difficult adjustment.

The following description of Manassa appeared in the Salt Lake Herald in 1879:

“The city of Manassa, so named, is situated in Conejos County, seven miles north by east of the county seat on ranges 9 and 10, township 34, north of New Mexico, principal meridian. A more beautiful location would be difficult to find, the site being selected with judicious foresight for agricultural and pastoral enterprises, and the settlers cannot fail ultimately to realize fully the most sanguine hopes of those now building the city.

……..The streets of the city are six rods wide, with streams running on either side, the immediate intention being to plant shade trees, according to the system established in Salt Lake City. Many of these streets are already occupied by the Mormon families, who at the present writing number 156 souls who are living in tents and temporary buildings. (3)

John and his family were among the sixth group to emigrate to Manassa from the South and by the time they arrived, 8 years after the first group, the town had grown considerably due to the large number of Mormon converts who had fled from the South.

By 1889, a  few years after John and his family arrived, almost a thousand people were living in Manassa, most of whom were Southerners. There was half a dozen stores, a log church and although initially most all of the homes were log, the log homes were slowly being replaced by small frame homes.(4)

Eventually, the Ganus families would have their own homes. As this early Manassa Map shows, “Frank”  (my Great-Grandfather William Franklin Ganus) had a home on Peterson Street (Lot 10) and “Father Ganus” and John Ganus were a couple of streets away on Smith Street (Lot 40).  (5) 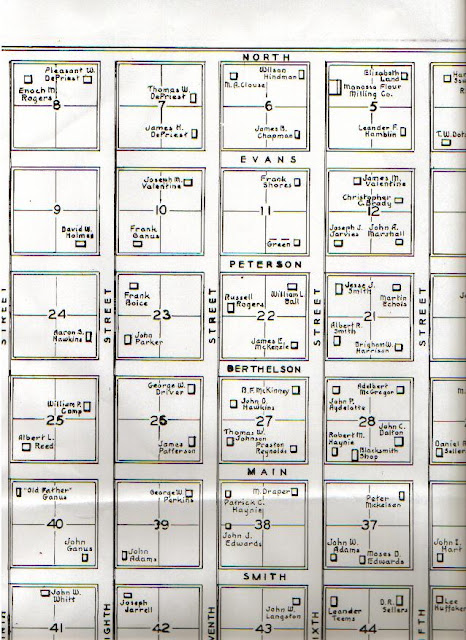 Adjusting to a different climate can be physically hard. At 7,690 feet, Manassa is approximately 6,447 feet higher than John’s home in Georgia. John’s family likely experienced some of the effects of that altitude change which for some includes fatigue and headache at first. In addition, the humid climate of their Georgia home was replaced by a much drier climate. The Ganus family had to learn to grow and eat different crops from what they were accustomed to due in part to the high altitude and short growing season. All of these issues presented challenges for John, as well as the other Southerners.

Whenever groups of people converge from different areas of the country and world, they bring with them the illnesses of that region and such was true for Manassa. Measles, smallpox, diphtheria, and mumps were just a few of the illnesses that plagued the valley. The Ganus family knew the heartbreak of losing family members to illness in the years that they were there and it seems to have especially taken a toll on the little children of the Ganus family. John and Olivia experienced the heartbreak of burying four grandchildren during the time in Manassa.

As I visited the Old Manassa Cemetery several years ago, I stood in that little abandoned cemetery and imagined the grief the Ganus family felt each time another child passed away. Four times they brought one of their little ones to be buried, four times they dug a small grave and four times they said goodbye.

The Ganus family had come to Colorado for safety, and although they were safer from physical and emotional harm, illness found them.

When I stood in front of my Grandma Ganus’ house as a child, all those many years ago, and waited for the floats and horses to pass by, I wish I had known more about my ancestry and the price they paid. I wish I would have understood the sacrifices that were made, the hardships they endured and all that was given so that I could have the life that I have. I am sure I still would have appreciated the front row seat at the parade and the juicy hamburger at the carnival, but just maybe I would have felt all the more reason to celebrate.