I am pleased to welcome guest blogger, Lisa Lisson, author of the blog LisaLisson.com. Today Lisa shares with us her expertise in identifying ancestors in family photos, a topic pertinent to all who love family history. (Please note that Lisa’s post contains a few affiliate links that benefit her, but for which I do not receive compensation.) 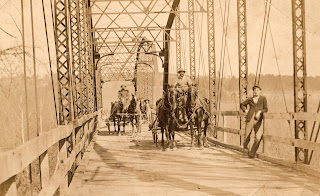 Do you have a few “unidentified” photographs among your ancestors’ photographs? Many of us do and the question is how we identify these individuals.
This photograph was in my collection of “unidentified” photos for quite a long time. Eventually I got serious on identifying the young man on the right leaning against the bridge.  The process of determining who the young man was required a systematic approach.
Provenance
This photograph was among my great grandmother’s (Winnie Haley Carr) photographs.  The collection eventually passed to her daughter Elton Carr, and then to her granddaughter, my aunt.  Oral history stated the young man was a Haley and the photograph would have been taken in the vicinity of Clarkson Plantation.
Knowing who held the photograph before me combined with the family’s limited oral history, I was able to narrow down my search to one family line.  I was looking for a Haley. That in itself was a big step forward.
Closer examination of the Photograph
Next I needed to get an up close look at the young man. Using Picmonkey, I cropped and edited the photograph to isolate him. 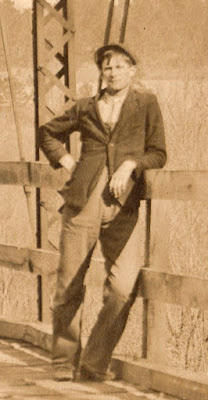 Isolating the young man and enlarging the photograph revealed the young man had a strong family resemblance to the Haley side of the family. I was on the right track.

Fashion
The young man’s clothing provides a few clues for dating the photograph. If he was indeed a Haley, then he would have been living in a farming community. He clothing has more of a functional look though he has dressed specifically for the photo with a coat and tie. Under his coat he is wearing overalls. His tie is narrow and resembles the ties of other photos of known young men of the 1910’s in my collection. His hat appears to be a flat cap that was commonly worn in the 1910’s in rural communities. 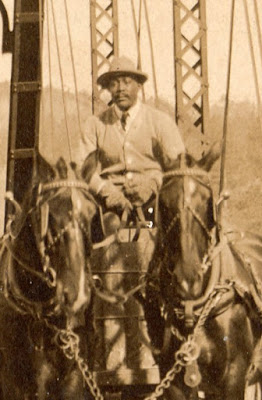 The African American man driving the first wagon looks dressed for the camera and his clothing looks less functional for farm work. The narrow tie and collar resemble the styles common in the late 1900’s into the 1910’s. His hat looks is similar to hats of men worn around 1910.
Based on the wearing of ties and more formal look as opposed to that of farmers who are actually working, this photograph was likely staged and not a candid one.
What Else Is In The Photograph?
Other things in the photograph lend clues to the location and time period of the photograph. The bridge itself provided a big clue. Knowing this photograph was in the Haley family and the Haley family lived in Clarkton, VA, I used a google image search for “Clarkton Bridge Halifax, VA”. The results confirmed the bridge in the photograph was the Clarkton Bridge over the Staunton River near the Clarkton Plantation. (Today the Clarkton Plantation is known as Ardross.) The bridge was built in 1902.
Compare To The Family Tree
At this point, I felt I had enough information to go to my family tree and see if any Haley men matched the unknown young man. Let’s review what was known.  This photograph was in the possession of my Haley side of the family. Specifically, its earliest known owner was Winnie Haley Carr of Halifax County, VA. The young man is standing on the Clarkton Bridge built in 1902. Obviously the photograph was taken after 1902. The clothing points to a date of late 1900’s to early 1910s.
Looking at the Haley family tree, I knew I was looking for a young Haley man who would have been about 20 years old in the late 1900’s or early 1910’s. The best possible candidate was Percy Haley, the eldest son of William and Clara (Holt) Haley.  Percy was born in 1890 on or near the Clarkton Plantation. (Percy’s father was the overseer of Clarkton Plantation.) A much later photograph of Percy was then located for comparison. 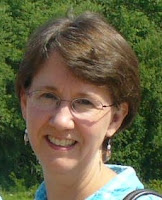 Lisa Lisson is a genealogist, blogger and author of Identify Your Ancestor In That Photograph: Strategies to Analyze and Determine Who Is In Your Family Photos (to be released 15 June 2016). Passionate about genealogy research and helping others find and share their ancestors, Lisa can be found at LisaLisson.com, Facebook, Twitter, Instagram and Etsy.