I remember loving to watch the cartoon “Heckle and Jeckle.”  The two talking magpies were constantly creating trouble and their antics always made me laugh.

If you’ve forgotten the rascally duo or have never seen the cartoon, I found a compilation of some of their cartoon antics here.

I am not sure if there weren’t any magpies where I grew up or if I was just oblivious to them, but I never remember having them around. But I do remember after a move to a new state that I was surprised to learn that the annoying birds who made a daily ritual of stealing our dog’s food and then taunting him with it were the very birds who had made me laugh as a child.

Apparently magpies can be found in Colorado because in her autobiography, Olive E. Faucett Christensen shared an experience she and her cousins, Orson and Heber Ganus, had with a magpie. At the time the orphaned twins were living with their cousins. 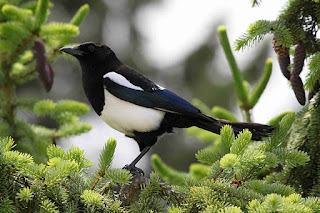 According to Olive, the twins Orson and Heber robbed magpie nests and broke the eggs. I am not sure why they thought that was fun, but I’ve long since given up trying to figure out little boys. Apparently one day when the two boys were out looking for eggs to break, they found a baby magpie and decided to bring it back to the house. Orson, Heber and Olive put the little bird in a box and kept him in the house as a pet. The three kids would spend time gathering worms and feeding the little bird. As it grew, Olive said it began to make weird noises, but it was gentle and stayed in the house and the kids decided it was a great pet to have around. They called the bird “Old Mag.”

Olive’s mother must have been a very patient woman to have allowed a magpie to live in their home. Knowing what I do about magpies, I can imagine not only the mess the bird must have made, but the mischief it must have caused as they seem prone to take things and to torment. But apparently those weren’t the only issues to be concerned about. Olive recorded that with time their little pet became a lot less gentle. In Olive’s words:

“As it grew older, it sorta got mean, its tail never did grow out and when it started to talk it would ruffle up its feathers and if it could get to your bare hand it would sneak up when you weren’t looking, sock its bill down in your flesh as hard as it could, then step back and laugh and just shake all over like it was tickled to death. It loved a bare foot or elbow.”

I would think that might be a good time to send the bird on its way, but apparently even its meanness didn’t persuade the kids to get rid of her. It would appear that Old Mag was just as attached to the kids as Olive indicated that the grouchy pet was in and out of doors, free to do as she chose and she chose to stay.

Olive shared that one day Old Mag messed with the wrong guy when she bit Orson really hard and he hit her with a stick. She said that they kept her for a long time after that, but one day she disappeared and they never knew what became of her. Maybe Old Mag had had enough or just maybe…..someone else had.