By all appearances, he was alone.  While there are some experiences that must be faced alone, its when we face the critical crossroads of life that we generally hope that someone will be there beside us, helping us to take that next crucial step.  Such is the case with death and so it pains me to think that as Sanford Rainwater approached his final threshold,  no one was there to help ease him across.  No one wants to die alone.

While I do not know his full story or if even the story I think that I see is accurate, I will share what little I have found about Sanford Rainwater, with the hopes that maybe someone else has a puzzle piece or two that they can share to help complete the picture.

Sanford Rainwater was my first cousin 3 times removed, which in ways doesn’t sound very distant and yet, the distance is significant enough that I have no personal knowledge of him at all.

As I learned about him,  there were several things that troubled me, but it was his death certificate that bothered me the most.  With just enough detail to help me determine that it was indeed “him,”  it was the following information on the certificate, or should I say, lack of information, that really tugged at my heart. 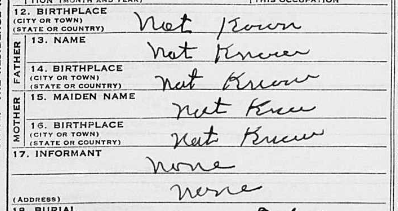 Seeing “not known” beside birthplace and even beside “name of father” and “maiden name” of mother is really not that unusual,  but seeing the word “none” for his informant was heart wrenching to me. Was there really no one living nearby that knew him well enough to provide information for the death certificate?  Was there no one that could provide some of the most basic facts of his life?  Was he really that alone?  Other records seemed to confirm that he had been alone for some time.

Sanford Rainwater was the oldest of two children born to John and Bargilla [Moore] Rainwater.  Sanford’s father, John Rainwater was a younger brother to my 2nd great grandmother, Olivia Rainwater Ganus.  Born in February of 1866 in Georgia, Sanford was likely born in Haralson County.  By 1869 John and Bargilla (or Barzilla, records vary)  had moved their family to Upshur, Hamilton County, Texas, along with John’s brother, Abner, and his family, as well as John’s father, Joshua, who was then a widower.

Sanford’s mother became a widow when in 1890 John died and was buried in Hamilton, Texas.  In about 1894, when Sanford was 28, he married Alice Atkinson.  The couple had two children together.   A daughter, Minnie Jane, was born in1896 and a son, Jessie, was born in 1898.  By 1900, Sanford, Alice and their two children had moved to Creek Nation, Indian Territory, an area that would later become Oklahoma.  It was fun to discover that Sanford and Alice were living next door to his aunt and uncle,  (my 2nd Great Grandparents) John and Olivia [Rainwater] Ganus. Both families had moved from Georgia with John and Olivia first living in Colorado before settling in Indian Territory, whereas Sanford’s family had initially moved to Texas.  Apparently the families had maintained enough communication to be aware of each other’s location.

Sanford’s wife, Alice,  was the daughter of Reverend Alonzo Atkinson.   Family lore indicates that Alice’s parents were not too crazy about her marriage to Sanford and I wonder if that contributed to their move to Creek Nation.  Sadly the relationship did not last and by 1910, the couple had divorced. Sanford is shown on the 1910 US Federal Census divorced and living in Sherman, Texas as the head of household and his 71 year old mother Bargilla was living with him.   Alice however had remarried by then and was living in Mills, Texas.  While I eventually tracked down their daughter, Minnie, as a married adult, I have never been able to locate son Jessie beyond the 1900 census when he is shown with his parents and sister.  It troubles me that at the ages of 12 and 14, neither children were listed with either parent in 1910 and also do not appear to be with either grandparents, aunts or uncles.

I was able to find Sanford in City Directories in 1903 and 1910 in Sherman, Texas,  and in 1912 in San Antonio.  In each location, his mother Bargilla was living with him. Bargilla died in 1919 and from that point on, Sanford is shown living alone in Aransas Pass, San Patricio, Texas.  In 1920 he was working with the railroad and in 1930 he was doing odd jobs. Every indication is that he never remarried following his divorce from Alice.

I did locate the death certificate for Sanford’s daughter, Minnie.   Her husband was the informant and while it lists her mother’s name as Alice Atkinson, her father is listed simply as “Rainwater.” This leads me to believe that at least as an adult, Minnie maintained some type of relationship with her mother, but likely little if any contact with her father.  Distance alone would have made it difficult to see much of her father.  On the map above, the star indicates Parker County where Minnie lived most of her adult married life and where she died.  The red county on the gulf is San Patricio where Sanford spent the last 20+ years of his life and where he died.   Why did he choose to live so far from his only daughter and grandchildren?

And that is the end of the trail!  Other than his death certificate, I can find nothing more about Sanford.  Even online family trees fail to provide any photos, hints or further insight to his life.

On February 2, 1940, at the age of 74, Sanford Rainwater passed from this life and while all clues seem to indicate that he lived much of his life alone and even died alone,  for me, he is not forgotten and hopefully someday I will know more.

UPDATE: More has been found about Sanford. See posts But Wait There’s More! and Where the Common Feel Famous,

1 thought on “Alone, but Not Forgotten”