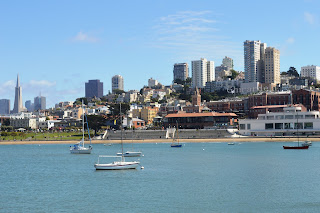 I sat by a window overlooking the city and watched while, many stories below, people scurried about like ants intent on their business. Some were businessmen, others were shoppers and then there were others who didn’t seem to fit in either category. My husband had business meetings in San Francisco and so I had gone along for a much-needed break. While my days were filled with shopping and exploring the city, in the evenings Rick and I enjoyed the food and entertainment as well as the other fun things that the city had to offer.

However, our fun trip came to a screaming halt when my husband came down with food poisoning in the middle of the night one night. Meetings and activities were canceled and the focus became getting him well before our flight home. While he slept, I sat by the window and watched with amazement the flutter of activity typical of a large city. We were staying in downtown San Francisco and our room partially faced the street, but through another window I could see a portion of a side alley. 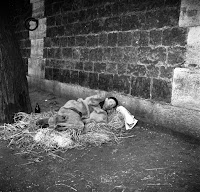 The activities on the street seemed pretty commonplace, but those that took place in the alley nearby revealed a whole different world. Although my view did not allow me to see all that went on, I could see enough. One man spent hours setting up pieces of cardboard and arranging his meager belongings. Soon others approached him and a discussion ensued.What were they talking about? As it grew later and the sun began to set, others began to set up near the original cardboard dwelling and soon there was a handful of homeless all preparing for the oncoming dark of night.

Having lived much of my life in the country or in small towns, I had not seen people living this way before, but many do today and I guess they always have. In her life history, Grandma Hazel Mickelsen Ganus shared some of what she experienced in the hills near Lake Almanor, California where she and my Grandpa Heber Monroe Ganus and their children lived and worked during the depression. (I shared more about my grandparents’ experiences during the depression in an earlier post that you can find here.)

“The men on the job were paid every two weeks. If we went to Greenville on a Saturday night for groceries, we would see drunks lying in the alleys, or in the gutter. I was almost afraid to go to town then.

“A big group of men had what they called, jungled up, in the woods. They had made little huts or lean-tos from scraps of boards, tin, cardboard or limbs from the trees or anything they could find and put together for protection from the cool nights.

“They would pool what money they had for something to drink, having hit the camps and getting at least one good meal a day. They got so bad with their drinking that the liquor stores were asked by the police to stop selling whiskey to them. they then got to buying bottles of vanilla, then finally to canned heat. This they would melt then drink it. This stuff really got them to raising cane. They even got to fighting so bad that the police were called to settle the matter.

“This kind of jungle mess was called a bum’s nest. There was one woman among these men, and she had a baby one night out there. Some of the people in town got word of it and went there and brought her in to the hospital where she could be taken care of. The police broke up the nest and made them separate and move. There were many such places as this called bum’s nest during this depression from 1930 to 1934 that we knew about.”

Having grown up in a small rural farming community in Southern Colorado, I am sure much of this was very foreign to my grandparents. My grandmother was always a quiet woman and I can imagine that she felt concern for herself and for the safety of her children during those times, but she also had compassion for those who were without work or a place to live and she indicated that she would often share their food with them.

Our trip to San Francisco quickly came to an end and thankfully my husband recovered just in time to make the flight home As our plane took off, the sun was beginning to set and I was sure the busyness had begun once again in that alley in downtown San Francisco. Although the times have changed, many still live in sad and desperate situations. We may not refer to a “bum’s nest” anymore, but those without jobs and a place to lay their head at night still take to the hills or to the inner workings of big cities when the sun begins to set.