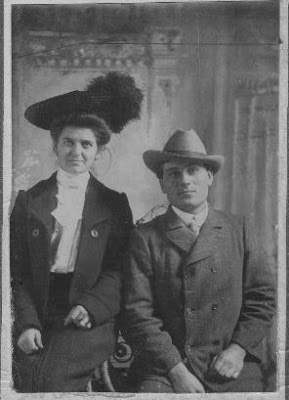 As I shared on a previous blog post, on the back of a picture in my grandma’s collection were the words “Carl Fricks and wife.” Initially I had no idea who Carl was, but thanks to a DNA test, I was able to find not only Carl, but a new modern day cousin to help with the search.

With both my new found cousin and I knowing very little, we combined what we did know and then launched into a search to find more about Emma (Martha Ann Emmeline Faucett) and her husband Ramsey Fricks.  My cousin indicated that her records showed that Ramsey and Emma had a son named Carl. Knowing that both Ramsey and Emma’s families had lived in Walker County Georgia, we started there.

Located in the northwest corner of Georgia, Walker County is nestled up against both the Alabama and Tennessee borders. From there it is about 30 miles to Chattanooga and a little over a 100 miles to Atlanta. With densely treed mountains, rivers, lakes and waterfalls, Walker County was and is beautiful.

It was there that Ramsey and Emma settled down and began their family. Soon the kids began to come and by 1900 Ramsey and Emma had six children living with them, the oldest was 14 and the youngest was 4. [2]  I had hoped to find Carl among those children, but sadly he was not listed in the household. But luckily the census did indicate that Emma had had seven children, so maybe Carl was a part of that family after all.

While no Carl Fricks could be found on the 1900 census anywhere, according to a 1903 Chattanooga City Directory, a Carl Fricks was living just across the border in Alton Park, Tennessee and working for Chattanooga Bottle & Glass Manufacturing Company.[3]

A year later, back in Walker County, Georgia, Carl Fricks married his bride Mary Alice Ellison on 2 January 1904.[4] Although they tied the knot in Georgia, by 1910, Carl and Mary were living in Marion, Tennessee, just outside of Chattanooga, along with their two little girls Lela and Geneva (Hassel), and a son, Robert. Carl tried his hand at farming and Emma was busy “keeping house.” [5]

Whether Carl tired of farming or simply had other aspirations, he turned to carpentry work in the years that followed and continued in that work throughout his life. Apparently Tennessee agreed with Carl and Alice because they remained there all of their married life.

On January 28th, 1918, just 20 days after their 14th wedding anniversary, Alice died of heart failure, leaving Carl with their 3 small children.[6]  At the time, Lela was twelve, Robert was eight and Hassel was only six. The following month Carl registered for the draft and from that application we learn that he was of medium height, medium build with brown eyes and brown hair. [7] I can’t help but wonder about his emotions as he registered. Was registering such a standard procedure for all men of his age that he registered without thinking much of it, or did he feel a tug at his heart at the thoughts of possibly having to leave his kids?

The following year, on the 20th of April 1919, Carl, a thirty-nine years old widower, married Edith Coffee (formerly Holtzclaw) [8] and together they created a blended family consisting of Lela, Hassel, Robert E. and her two sons Walter and Willie.

Once again Carl married in Walker County, but settled down in Tennessee. Always renting, Carl and his family had a tendency to move about somewhat, but always remained in the same general area of Chattanooga. In 1920, thirty-nine year old Carl, forty-two year old Edith along with children Lela, Hassle, Ed and Walter were living in St. Elmo.[9]  By 1930 Carl, Edith and Carl’s twenty-four year old daughter, Lela, were living in Chattanooga. [10]

On the 6th of June, 1936 Carl passed from this life due to cardio vascular renal disease. [11] Once again, just as he had done for his marriages, Carl returned to Georgia, this time to be buried.

Carl’s death certificate confirms his father was Ramsey Fricks and indicates his date of birth was 18 July 1880. With the 1880 census taken in Walker County just one month prior to his birth, Carl did not appear on the 1880 census with his parents and by the following census in 1900, he was 20 and by all appearances had ventured out on his own.

My search began with the picture, with the words “Carl Fricks and wife,” on the back. Since I first acquired the picture, I’ve come a long way in learning about Carl’s life. As it turned out, this mystery man was in fact my first cousin, twice removed. But there is one question that remains unanswered;  Just who was “and wife?”

Although I can’t say for sure, by her appearance and considering her age, I suspect it was Carl’s first wife, Mary Alice Ellison. Carl and Alice married when she was 24, but Carl married his second wife Edith when she was 42. In addition, looking at the styles of hats women wore in 1904, when Carl married Alice as compared to the styles in 1919, when Carl and Edith married, the woman’s hat in the picture seems more consistent with the styles of the early 1900’s. In either case, I would love a photo of either of these women to help confirm the identity of “and wife.”

Going through the DNA matches on Ancestry.com can sometimes be overwhelming. The vast number of matches without the benefit of attached trees is disheartening, the quality of the some of the attached trees and other issues can make the task of finding common ancestors daunting if not down right depressing.That said, sometimes things fall into place and when they do, the effort to do a DNA test is worth every drop of spit and dollar spent to help us find those cousins, both living and dead.